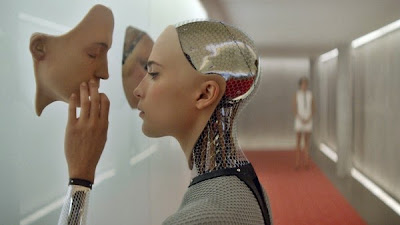 The idea of artificial intelligence and human-like robots interacting with people is utterly fascinating and is widely explored in the future worlds of sci-fi movies. But in reality, it is far more of a philosophical, and even physically terrifying, conundrum.

Many of today’s great tech minds have expressed awe, desire, and fear over this very topic – as very cleverly outlined in the ominous advertising for the new film, Ex Machina.

“The development of full artificial intelligence could spell the end of the human race.”
– Stephen Hawking

“AI would be the biggest event in human history. Unfortunately, it might also be the last.”
– Elon Musk

While many films have touched, or even focused, on both sides of that coin, very few have explored both sides as thoroughly and effectively as Ex Machina.

Like a more contained Blade Runner for the digital age, Ex Machina probes deep into the minds of creator and creation alike. The brooding Oscar Isaac plays Nathan, an Elon Musk/Mark Zuckerberg hybrid genius, who is a confusing mix of congenial, mysterious, and intimidating. After creating a groundbreaking search engine, he has taken the next step in AI evolution by creating Eva, a nearly flawless humanoid robot. He is well aware of the ramifications of his creation, but casually dismisses them. He is not a mad scientist, just an arrogant one.

Built with a mesmerizing mesh silhouette, Eva is angelically embodied by Swedish actress Alicia Vikander. Delicate and complicated, manipulative and childlike, it is fascinating to watch her evolve as the film progresses. She learns and adapts quickly, which only makes her more fascinating, yet foreboding. The film does a terrific job of humanizing her. The audience, fully aware of what she is, truly cares about her - perhaps we have already failed the Turing test.

The other human element in this cinematic Turing test (a frequent reference in the film) is Caleb, the polar opposite of Nathan, played by Domhnall Gleeson. As an employee of Nathan, Caleb is the winner of a company-wide contest selected to visit his boss’ top secret mountain laboratory to help test Eva’s consciousness.

Everyone (and everything) in this film is incredibly intelligent. The three characters play a continual game of chess (another frequent reference) with one another – and the audience. Motives are questioned, allegiances are switched, and actions are surprising even when they are predictable. From the start, Caleb is seemingly just a pawn in their game, but he eventually attempts to take matters into his own hands. Everyone has an agenda and nothing is revealed to the audience until the filmmakers want us to know. And often our assumptions are wrong, likewise for the characters in the film.

Ex Machina does hit some familiar genre notes – it’s unavoidable – but in the end, it explores them far more deeply and satisfyingly than its predecessors. The film is a multi-layered commentary that plunges the depths of such heady themes as consciousness, voyeurism, technology, and our very existence. The film is a fully engrossing trip, one of the most satisfyingly cerebral sci-fi films in quite awhile, and easily the best film of the year so far.

Now that AVENGERS: AGE OF ULTRON is out and people are basking in its awesomeness, the time is here to rank the films of the Marvel Cinematic Universe. So far, eleven films from this Universe have been released (sorry, while X-MEN is Marvel, it is not part of the Cinematic Universe). With no signs of slowing (there are at least ten more films planned for the Universe), it should be stated that this is one incredible franchise. Crossing over that many properties and characters was a gargantuan task and should be considered one of the greatest successes in film history. So we proudly present . . .


11. The Incredible Hulk
I respected the risk of not doing an origin-story film, but the lack of good dialogue was hard to take.
The usually stellar Ed Norton, was reduced to nothing, as most of his scenes were stunt doubles or computer generated. It's by far the weakest film from the Marvel Cinematic Universe.

10. Thor: The Dark World
A beautiful looking film, but it's a complete snooze fest when Loki is not around.
It lacks the charm of the original and instead tried to "go dark", (just look at the title).
This would have been better off as a romantic comedy with Thor and Jane.

9. Thor
Beautifully shot, funny and just campy enough to maintain its integrity in the Universe.
I loved all of the stuff with Thor on Earth, and Natalie Portman should be in every movie.
Throw in the best work of Kat Dennings career and the badassness of Loki, and it was a good time.
Don't be fooled by how low it is on this list, Thor is definitely a solid popcorn flick.

8. Captain America: The First Avenger
Solid origin story, full of good ole Greatest Generation nostalgia.
The only (slight) problem with Captain America is that he is just so darn sincere ... and moral.
I always like an edge to my comic book heroes: Batman, Wolverine, Tony Stark,
They do their best to have a good time with how square he is but, let's be honest, the other Avengers are just more fun. However, I do feel bad that he missed his date.

7. Captain America: The Winter Soldier
An underrated part of this film was the TV tie-in with "Agents Of  S.H.I.E.L.D.".
You could still enjoy it without the TV backstory, but it definitely rewarded you for weekly viewing.
It also had impressive action sequences, a lot of Black Widow and the welcome addition of Falcon.
Again, don't be fooled by the placement on this list: this movie is worth your time.
On your left!

6. Iron Man 2
The highlight of this film is obviously Mickey Rourke as the villain Ivan Vanko:
"Where eez my bird?" "Droid better." "This is not my bird."
Unfortunately, Mickey wasn't very happy with it how it turned out:
He accused Marvel Studios of making him one dimensional with bad editing.
Don't worry Mickey, I loved it anyway and you're still the man.
Rumble Fish for life!

5. Avengers
They assembled and it was awesome.

4. Iron Man 3
IRON MAN 3  has great action, story, wit, style and (real) substance.
In perhaps his best turn as in-flux hero Tony Stark, Robert Downey Jr. reminds us why this franchise became so huge, so fast. Downey and director, Shane Black, furthered a genre that was becoming increasingly obvious and easy. They delivered a complete film, that will entertain people of all ages and is far greater than the usual Summer Blockbuster. Read my original review here.

3. Avengers: Age Of Ultron
Yeah, I said it.
This movie is better than the first.
Even when the fate of humanity hangs in the balance their banter is still on point.
James Spader killed it as the voice of Ultron and the Twins (Quicksilver/Scarlet Witch) were dope.
Are you hammer worthy?

2. Iron Man
Ah, Tony Stark, so glad to have met you.
I remember hearing about this movie and thinking it was going to be awful.
However, the rejuvenated Robert Downey Jr. and the directing of Jon Favreau, left me satisfied.
Iron Man showed that comic book films can be serious, but also funny.
Make sure to thank RDJ if you meet him, his performance saved the Universe.

1. Guardians Of The Galaxy
The Marvel Universe was becoming too procedural and repetitive:
Enter a rag tag group of trash talking Aliens to save the day.
Guardians gave us a lot of new things to digest and it was exactly the breath of fresh air needed.
I like this film more every time I watch it:
The action, the music, the wide-shots, the deep focus and of course, that title screen!

11 - Thor: The Dark World
I know I have seen this movie, but honestly, I hardly remember anything from it. There were some aliens, right? Loki is probably funny and the best part. That’s all I’ve got.

10 - The Incredible Hulk
An oddity for sure in the Marvel Cinematic Universe – simultaneously a sequel and a one-off. A decent film, but Norton is still an odd choice for Bruce Banner. Ruffalo is better.

9 - Thor
Thor again, but this one I actually do remember. And I did like it, but it’s obviously on the lower end of the scale for Marvel. It’s not Chris Hemsworth’s fault, and it’s definitely not Tom Hiddleston’s – maybe it’s the rainbow bridge or blue aliens or the small NM town setting.

8 - Iron Man 2
While not great, it certainly was not the trainwreck everyone thought it was upon release. Sure, it paled in comparison to the first, and ultimately overshadowed by the third, but it’s still a fun film. And Robert Downey, Jr. sparring with Sam Rockwell will always be great. Plus, it introduced us to Black Widow.

7 - Avengers: Age of Ultron
I liked the Avengers sequel, I just didn’t love it. I thought it was overstuffed, forced, and a bit hollow compared to the first and all other MCU movies, but still a really fun ride. Check out my review here.

6 - Iron Man 3
A great movie that I loved after seeing it the first time, but then, kind of forgot. I caught it again a few weeks ago and was glad to see it still did it for me. Ben Kingsley and the twist were excellent. Give director Shane Black more movies!

5 - Guardians of the Galaxy
I had my doubts about this one from the start, but I am happy to admit that I was wrong. A super fun movie, thanks to Chris Pratt, Bradley Cooper, and even Vin Diesel. I wanted a bit weirder though (like I was promised!).

4 - Captain America: The First Avenger
I love the period setting that helps separate it from all other Marvel entries (the war bonds montage is terrific). Also, has one of the best supporting casts in any Marvel movie – Tommy Lee Jones, Stanley Tucci, Hugo Weaving, Dominic Cooper, Haley Atwell, and Toby Jones. Plus, old school Hydra is the best kind of villain-producing factory.

3 - Iron Man
Downey as Tony Stark started it all and the first film holds up as a really solid and fun flick.

2 - Captain America: The Winter Soldier
Almost my #1. Just a great action film. Chris Evans nails the moral compass that is Captain America, The Falcon is a great addition to the team (if they would ever invite him along), and the increased role for Scarlett Johansson is a big plus for everyone.

1 - The Avengers
Dan is crazy, the first Avengers is leaps and bounds better than the overstuffed sequel. The first is the perfect balance of each character, great story and dialogue, and an actual villain.