There have been upsets, fierce battles, blowout victories and some feelings have gotten hurt.
It was a bracket full of big name directors, top talents, Oscar winning pictures and performances.
We had 13 years worth of great films.
Two have survived to play for the title of Best Film Since 2000.

In the First Final 4 Match-Up: 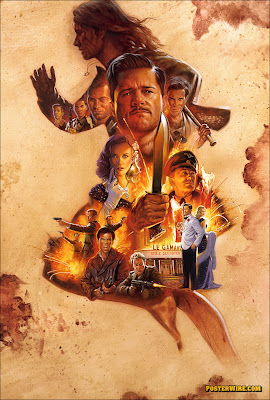 REQUIEM is very good (thoughts here) , but it couldn't top BASTERDS.
I've seen BASTERDS about 15 times now, and I really do like it more, every time I watch.
It may not be the best Quentin Tarantino film, but it is his epic.
The first sequence is a rocket taking off, and the rest is a journey through the Tarantino Universe.
We get the fast, witty dialogue, the great casting and boy, do we the wild characters.
Col. Hans Landa (Christoph Waltz) makes Marsellus Wallace (PULP FICTION) look nice.
Waltz was able to capture and portray true evil, without going nuts (i.e. Nic Cage, in everything).

We also get Hugo Stiglitz, Aldo Raine, Shosanna and Donny Donowitz (Eli Roth).
I love when Donny, aka The Bear Jew, starts hitting his bat against the wall.
You know it's gonna get ugly, but you can't wait for the mayhem to start.
That's QT.
He can take the most disturbing subjects and present them in an entertaining way.


I mean, one of his most memorable characters, is The Gimp, from PULP FICTION.
That's right a captive, male, sex slave, who never speaks, is a big part of the QT family.
Who is The Gimp? How did he become The Gimp?
You don't really want, or need the answers.
QT let's your imagination do his dirty work, but burned something into your mind, forever.

I want to save the rest of my BASTERDS praise for the finals.
It has beaten REQUIEM, both KILL BILLs, BROKEBACK MOUNTAIN and CHILDREN OF MEN.
However, it's going to need help to win the ultimate prize.

For the title of Best Film Since 2000, INGLOURIOUS BASTERDS will face . . . 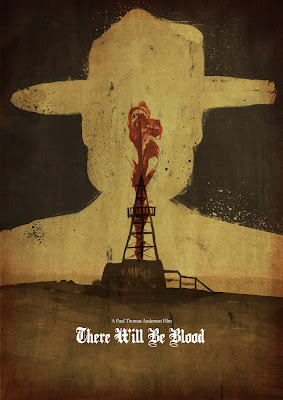 BLOOD eliminated #6. THE SOCIAL NETWORK in a hotly contested battle.
I'm glad SOCIAL NETWORK made it this far.
It got ROBBED at the 2011 Oscars.
THE KING'S SPEECH was probably the sixth, seventh or eighth, best film of that year.
SOCIAL, BLACK SWAN, and INCEPTION all made this Tournament, but missed the Oscar.

SOCIAL was great, but BLOOD proved be too much for the kids from Harvard.
It also beat MARIE ANTOINETTE, PAN'S LABYRINTH, TRAFFIC and ROYAL TENENBAUMS.
Taking out all of those quality films was quite the task, but Daniel Day Lewis can do anything.

D.D.L. is the man.
There is not any actor, male or female, that is on his level in terms of quality and consistency.
Every time this guy gets in front of the camera, he plays for keeps (and Oscars).
BLOOD is no exception.
His work as oil man, Daniel Plainview, is the definition of "tour de force".
D.D.L. plus Paul Thomas Anderson, plus Plainview, plus Eli Sunday, equals awesome.


The Championship is Set!

#1. INGLOURIOUS BASTERDS vs. #2. THERE WILL BE BLOOD

Quentin Tarantino vs. Paul Thomas Anderson
Two members of the North/South Mount Rushmore will battle for the title. 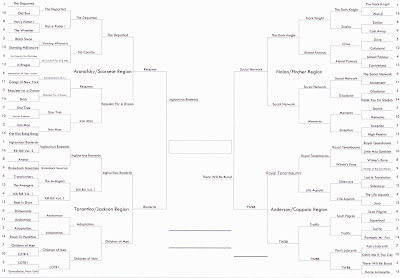 The above photo (click to enlarge) has all the Results so far.