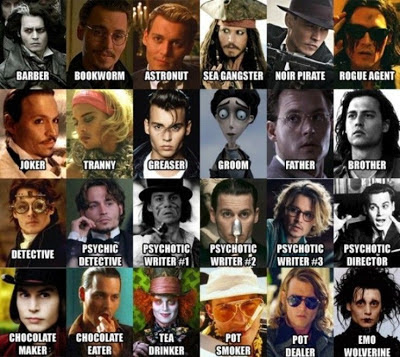 Another week, another Top 5 List.
This time, we tackle the lengthy and varied filmography of actor Johnny Depp.
From A Nightmare on Elm Street (1984) to Dark Shadows (2012).

Just like the last few years, Depp has yet another big potential blockbuster hitting theaters in 2013 . . . this week in fact: Disney’s The Lone Ranger (opening Wednesday, July 3).
Hopefully, Johnny can revive this once great and treasured property. 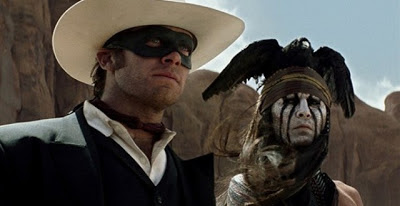 Check out our previous Best Of Lists – Stanley Kubrick - Michael Bay - Tony Scott - Jamie Foxx.
And if you feel like we left out or disregarded a particular Depp film, please let us know in the comments. We are always happy to hear a few differing opinions.
We only agreed on 2 films of 5, which is par for the course at North/South.

So Click The 'Read More' Below For The Johnny Depp Lists!

I know I am already cheating by starting off with a tie, but to me, these two films perfectly encapsulate Johnny Depp’s career – therefore worthy of a tie and a good place to start. With this, I am not saying Depp has “sold out,” just that there is a marked difference in his early and late films. 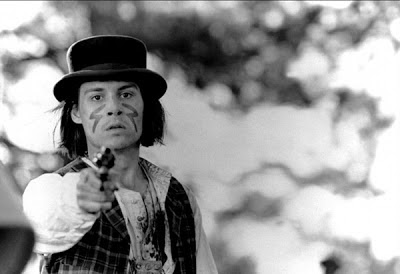 Dead Man is a minimalist, post-modern Western from director Jim Jarmusch. Like most of Depp’s early work, the film is a bit eccentric and, at times, challenging. Depp plays William Blake, a meek accountant relocated to the old west, who after murdering a man, goes on the run with a Native American guide and finds himself on spiritual journey through a psychedelic world. That’s a pretty basic explanation of a complex movie, but the experience has only gotten better after repeated viewings.

Whereas Sweeney Todd, like so many of his latest efforts, is much more general audience-accessible (though Depp still has his own delightfully weird take on each film/character). Wonderfully imagined and stock full of catchy songs and interesting characters, the film was a more-than-welcome, though all too brief, return to form for the director/actor duo of Tim Burton and Johnny Depp (a pairing we will certainly see again on this list). 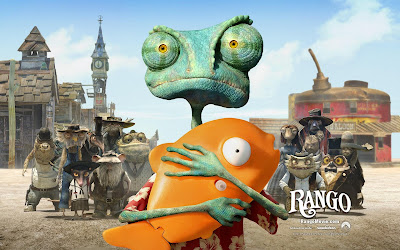 An unusual choice for sure, but Rango is definitely one of my favorite animated films of the past decade or so. Playing a chameleon – which thanks to his constanly evolving career, is a perfect fit – Depp’s knack for off-kilter and amusing performances is still able to shine through in his voice work (there was some motion-capture work as well). Though targeted for children, the movie is so chock-full of pop culture and classic movie references (particularly Depp’s own, Fear and Loathing In Las Vegas and countless westerns) that make it make it just as entertaining for adults as kids.

Dan and I are both huge fans of writer Hunter S. Thompson, so this film is sure to be high on both our lists. The film, directed by Terry Gilliam, depicts Thompson’s doppelganger Raoul Duke (Depp) and his lawyer Dr. Gonzo (Bencio Del Toro) as they descend on Las Vegas to chase the American Dream in a drug-induced haze, all the while ruminating on the failure of the 1960s counter-culture movement. The film is fun, surreal, and absolutely hilarious – a twisted trip that I find myself constantly re-visiting every couple of months. 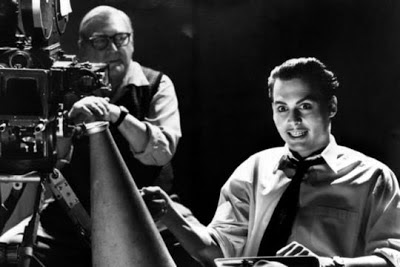 Real life filmmaker Ed Wood has been often been declared the worst director of all-time. His films, particularly the so-bad-its-good cult favorite Plan 9 From Outer Space, are inexplicably terrible, yet in some ways, endearing. The infamous filmmaker and his unusual films were, of course, a perfect fit for director Tim Burton and his muse Johnny Depp – the second of their eventual eight (and counting) collaborations. One of Depp’s best performances (though Martin Landau deservedly won the Oscar for Best Supporting Actor) and just a highly enjoyable and well-made film – plus an Orson Welles appearance (played amazingly spot-on by Vincent D'Onofrio, though voiced by Maurice LaMarche). 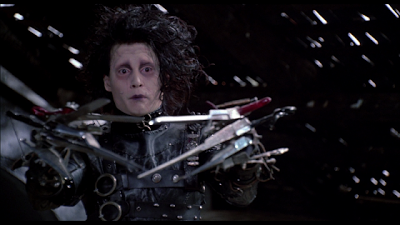 A Tim Burton-skewed, Gothic fairy-tale, Edward Scissorhands has always been a favorite film of mine. Depp’s breakout role and probably his most iconic, Edward Scissorhands is a story of outcasts, isolation, and self-discovery – plus, it has been said that it is both Burton and Depp’s most personal film to date. An instantly identifiable and classic film.

Before Night Falls (2000) and Platoon (1986)
-        Two great films, but Depp’s roles in each are relatively small and greatly overshadowed (I would certainly never describe either film as a “Johnny Depp movie”), so they get relegated here

Cry-Baby (1990)
-     The film itself isn’t particularly great, but I loved this movie when I was younger, so it holds a special place in my movie-obsessed heart

Pirates of the Caribbean: Curse of the Black Pearl (2003)
-      The first was great fun, but the series (and ultimately, Depp’s portrayal of Capt. Jack Sparrow) became watered down, repetitive, and a bit grating 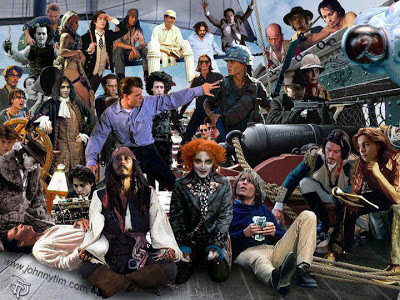 
Man, do I love this film. Me and some friends snuck into BLOW on opening night in 2001.
It remains one of my favorite theater experiences ever.
As I had expected, the film was great and the audience went wild.
It became an instant classic to the sixteen year old me.
It's funny, but also epic and sad.
Absolutely love Ray Liotta as Depp's father and it was also my introduction to Penelope Cruz.
Cruz is so good in this film, you could tell right away she was going to be a big star.
I thought her and Depp had great chemistry and their mutual descent, made the movie.
Also, you can't do much better than Depp scat-quoting Bob Dylan at his bail hearing (video above). 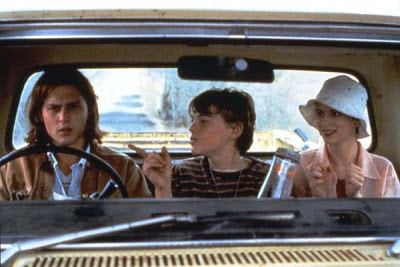 Most people think of WHAT'S EATING GILBERT GRAPE as a Leonardo DiCaprio tour de force.
While Leo is absolutely amazing in this film (and was nominated for an Oscar), Depp quietly turns in one of the best performances of his career. Gilbert Grape is a man struggling to keep his family together, while desperately wanting out of their lives. He knows he will never be able to leave the situation and his escapes are even growing tiresome. You know Gilbert will be saying, "Where's Arnie?" for the rest of his life and you understand that sometimes a person must give himself up for the greater good. Here, Depp puts outs the quiet, cool, angst that made him famous and has the ability to make you feel his pain with just a look.

You're crazy if you don't recognize that Captain Jack Sparrow is one of the ,most iconic film characters in recent memory. When I heard about PIRATES I thought it was destined to bomb. However, Johnny Depp got the housewives (and everyone else) to the theater (in some cases, dozens of times) and sparked a franchise that has done almost $4 Billion Worldwide. The first installment was easily the best film and is still number ten on the all-time domestic box-office list. Don't kid yourself, Disney is praying that Depp will help them strike gold again with THE LONE RANGER. Can Depp revive another property that has no connection to young audiences? We will have the answer by next week. 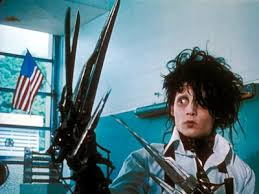 Some may cry, "blasphemy", but yeah, I've got Tim Burton and Depp's best collaboration at number two on my list. I was introduced to this film at a very young age, probably six or seven years old. I remember my parents let me watch it because I was mature for my age and they thought I could handle it. It didn't scare me and I liked it a lot, but it definitely went over my head. When I watched it later in life, I started to fully understand that the movie is not just about Edward being different and how people react when something is out of the ordinary. What this film really gets after is the idea that everyone is different, but we all don't have scissors for hands. Your ability to handle differences and difficult situations determines who you are as a person. The irony here is that it takes an artificial man to teach people how to be human. For Tim Burton to follow up huge, commercial successes like BEETLEJUICE and BATMAN, with such an offbeat film was a huge risk, but we are all glad it is a risk he took.


Hunter S. Thompson is my favorite writer and one of the most interesting humans to ever walk the earth. The film version of FEAR AND LOATHING had no chance to surpass the novel, but at least it turned out better than WHERE THE BUFFALO ROAM (which I also adore). In order to get inside the mind of Thompson and the character of Raoul Duke, Johnny Depp lived in Hunter's house and became great friends with a man many were too scared to even approach. One of my favorite scenes in the film is Duke at the type writer with his voice over reading (a slightly edited version of) Thompson's iconic words (video above). I think that Johnny Depp understood Thompson on a level that most could never grasp. That connection really shows in FEAR AND LOATHING and I am forever grateful that the film thrust Thompson back into the spotlight and into the minds of kids like me, who then had to get their hands on everything he ever wrote.

ED WOOD- Tough to leave it off the list, but I'd be lying if I said it's a personal favorite.
FINDING NEVERLAND- Awesome movie. Heartfelt, original and tragically underrated.
THE NINTH GATE- Polanski. 'Nuff said.
CHOCOLAT- 5 Oscar nominations, but not because of Depp. Again, just not a personal favorite.

Dishonorable Mention:
Well I think Chris and I covered just about every movie Depp ever made and there is not much left to discuss, but when I previewed the lists to a few people, I was immediately asked, "What about DONNIE BRASCO?" My answer to that is simple: go watch GOODFELLAS and tell me DONNIE BRASCO is a great movie. I'm not going to say it's absolutely terrible, but I will stick by my opinion that it has a very "Made For TV" feel to it.

Those Are The Lists!
Follow Us On Twitter For Movie News: @NorthSouthFilm
Posted by Chris at 11:36 AM