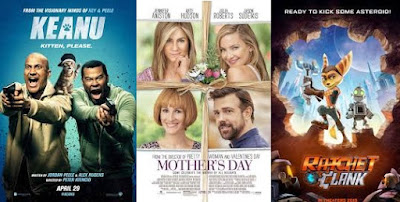 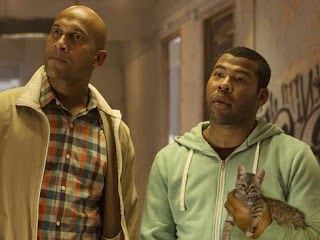 Official Synopsis:
Recently dumped by his girlfriend, slacker Rell (Jordan Peele) finds some happiness when a cute kitten winds up on his doorstep. After a heartless thief steals the cat, Rell recruits his cousin Clarence (Keegan-Michael Key) to help him retrieve it. They soon learn that a thug named Cheddar (Method Man) has the animal, and he'll only give it back if the two men agree to work for him. Armed with guns and a gangster attitude, it doesn't take long for the hapless duo to land in big trouble.

North's Take:
If you don't know about Key and Peele, click this link and get ready to laugh.
They've had a TV show for 5 seasons and are easily the best comedic duo around.
When I heard they had a movie coming out, I was stoked.
Then I heard it was about them becoming gangsters to retrieve their cute cat:
And I was even more excited.
Funny is funny.
This concept, in the hands of lesser comedians, could become Corky Romano 2.0.
With Key and Peele at the helm, rest assured: There Will Be Laughs! 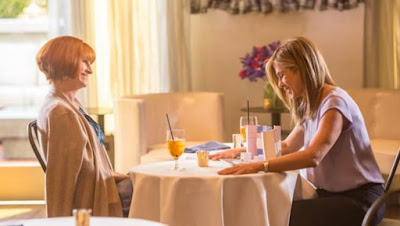 Official Synopsis:
Intertwining stories revolve around a television host (Julia Roberts), a divorcee (Jennifer Aniston) looking for love and a woman (Kate Hudson) who wants to strengthen her relationship with her mother.

North's Take:
Director Garry Marshall is a straight-up, Hollywood legend.
In his fifty plus years in the business, he created famous TV shows and classic films.
I doubt there is anyone who has never heard of "Happy Days" or Pretty Woman.
Mother's Day, which follows Valentine's Day and New Year's Eve, is simple in concept:
Julia Roberts, Jennifer Anniston and Kate Hudson have feelings about life.
I'm sure there is more to the film than that, but this is right in Marshall's wheelhouse.
He's been making audiences weep for years, from Beaches to The Other Sister.
I don't know if this film is destined for greatness, but I know Marshall has it in him.

Official Synopsis:
Ratchet is the last of his kind, a foolhardy lombax who grew up without a family. Clank is a pint-sized robot with more brains than brawn. After stumbling upon a weapon that can destroy entire planets, they join forces with a team of do-gooders known as the Galactic Rangers. Together, they must stop the evil alien Chairman Drek from utilizing this dangerous technology. Along the way, Ratchet and Clank learn valuable lessons about heroism, friendship and discovering one's own identity.

North's Take:
Back in 2013, I ranked the Best and Worst Movie/Video Game Combinations.
It will be a hard list to crack, but Ratchet And Clank has the potential:
Video games have basically become feature films and the transfer is much easier.
I doubt we will ever see a truly great film become an unplayble game.
The days of E.T. on Atari 2600 are long gone.
And I don't see them screwing up a film version of a great game series like R&C.
Can this combo make its way onto the list?
You'll have to go to the movies this weekend to find out.

Thanks For Reading!
Please Follow Us On Twitter For Daily Movie News and Links: @NorthSouthFilm
Posted by Dan at 7:18 AM No comments: 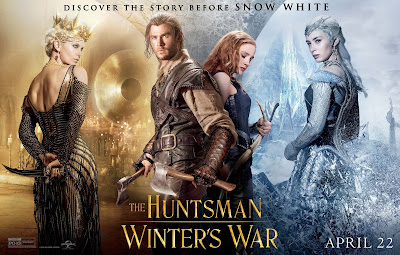 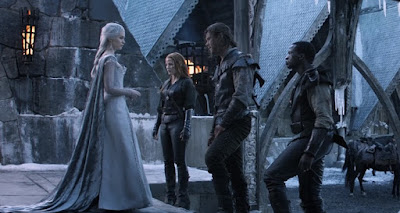 Official Synopsis:
Betrayed by her evil sister Ravenna (Charlize Theron), heartbroken Freya (Emily Blunt) retreats to a northern kingdom to raise an army of huntsmen as her protectors. Gifted with the ability to freeze her enemies in ice, Freya teaches her young soldiers to never fall in love. When Eric (Chris Hemsworth) and fellow warrior Sara defy this rule, the angry queen does whatever she can to stop them. As war between the siblings escalates, Eric and Sara unite with Freya to end Ravenna's wicked reign.

North's Take:
In 2012, Kristen Stewart ruled the box office.
She reprised her role in the Twilight series and starred in Snow White and The Huntsman.
The films combined for a Worldwide Gross of over $1.2 Billion and everything was set:
The sequel got the greenlight and surely, this was the start of her next big franchise.
Well yes, until it wasn't.

They kept the Huntsman and the Evil Queen, but Kristen Stewart?
She's gone, and so is Snow White.
Instead we get to see Emily Blunt (recently great in Sicario) take on Charlize.
That's just fine by me:
Theron and Blunt are top flight talents and can carry an action film:
Did you see Mad Max: Fury Road or Edge Of Tomorrow?
They kick butt with the best of 'em.

The Huntsman is the first feature film for director Cedric Nicolas-Tobin.
However, he is no novice to the industry or this series:
He was nominated for an Oscar for the Visual Effects on Snow White.
Since the effects were the best part of the first film, I'll check it out.

Last Week: THE JUNGLE BOOK, CRIMINAL, BARBERSHOP: THE NEXT CUT

Thanks For Reading!
Please Follow Us On Twitter For Daily Movie News and Links: @NorthSouthFilm
Posted by Dan at 6:46 AM No comments:

Now Playing: The Jungle Book, Criminal, Barbershop: The Next Cut 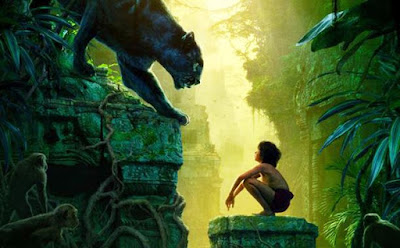 Official Synopsis:
Raised by a family of wolves since birth, Mowgli (Neel Sethi) must leave the only home he's ever known when the fearsome tiger Shere Khan (Idris Elba) unleashes his mighty roar. Guided by a no-nonsense panther (Ben Kingsley) and a free-spirited bear (Bill Murray), the young boy meets an array of jungle animals, including a slithery python and a smooth-talking ape. Along the way, Mowgli learns valuable life lessons as his epic journey of self-discovery leads to fun and adventure.

North's Take:
You had me at Bill Murray.
Throw in Ben Kingsley, Scarlett Johansson, director Jon Favreau and some great 3-D:
The Jungle Book has the recipe to become a classic.
I'm not a huge fan of the animated film (give me The Lion King, all day).
However, I completely trust Favreau to deliver:
His other "kid's movies", Zathura, and Elf, are wonderful for all audiences. 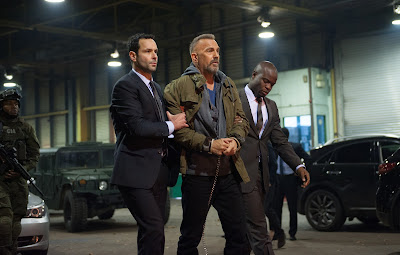 Official Synopsis:
CIA agent Bill Pope (Ryan Reynolds) dies while traveling to a secret location to meet a hacker who can launch missiles at will. Desperate to find his whereabouts, officials turn to an experimental neurosurgeon who can transfer memories from one brain to another. The guinea pig for the procedure is Jerico Stewart (Kevin Costner), a violent and dangerous death-row inmate. Now gifted with Pope's skills and knowledge, Stewart must race against time to stop a sinister international conspiracy.

North's Take:
Kevin Costner never stops.
Just check his IMDB page, he's been doing work!
He was recently very good in Draft Day, which was underrated and under-seen.
Here's my quick Top 5 Costner performances:
5. American Flyers
4. Bull Durham
3. The Untouchables
2. Field Of Dreams
1. JFK
With a résumé like that, I bet that him and Ryan Reynolds will make Criminal watchable.

BARBERSHOP: THE NEXT CUT 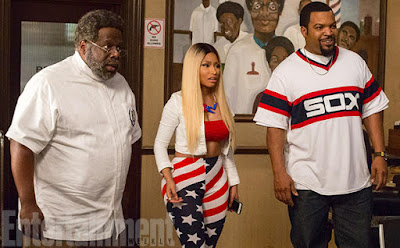 Official Synopsis:
To survive harsh economic times, Calvin and Angie have merged the barbershop and beauty salon into one business. The days of male bonding are gone as Eddie and the crew must now contend with sassy female co-workers and spirited clientele. As the battle of the sexes rages on, a different kind of conflict has taken over Chicago. Crime and gangs are on the rise, leaving Calvin worried about the fate of his son. Together, the friends come up with a bold plan to take back their beloved neighborhood.

North's Take:
The original Barbershop had some good laughs and also pulled at the heartstrings:
Throw out the gun, Ricky!
I expect more of the same from The Next Cut.
I'm pleased to see North/South favorite, Sean Patrick Thomas, is reprising his role.
Just so you know, Chris and I may be the biggest Cruel Intentions fans to ever live.
We used to yell "Valmont!" at each other in public all the time.
Plus, I still use "I guess that puts me in my place", constantly.
My only question about this film:
Can Nicki Minaj can take over the best Rapper/Actor title from Ice Cube?
Head to the theater to find out.

Thanks For Reading!
Please Follow Us On Twitter For Daily Movie News and Links: @NorthSouthFilm
Posted by Dan at 11:46 AM No comments: 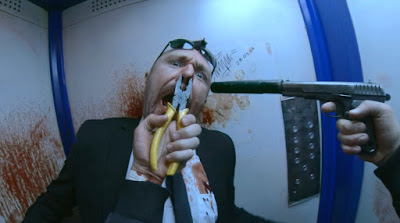 Official Synopsis:
A man wakes up in a Moscow laboratory to learn that he's been brought back from the dead as a half-human, half-robotic hybrid. With no memory of his former life, a woman who claims to be his wife tells him that his name is Henry. Before she can activate his voice, armed thugs storm in and kidnap her. As Henry starts to understand his new abilities, he embarks on a bloody rampage through the city to save his spouse from a psychopath (Danila Kozlovsky) who plans to destroy the world.

North's Take:
This movie looks INSANE!
Granted, point-of-view is not new, but this is the first time we have ever seen a wide release shot entirely from the perspective. First-person action/shooters are what sent the video game market into the stratosphere, so it was only a matter of time before Hollywood got into the act. I doubt Hardcore Henry will win any awards for it's screenplay, but the action sequences look legit. If you're looking for a unique theater experience, the search is over. 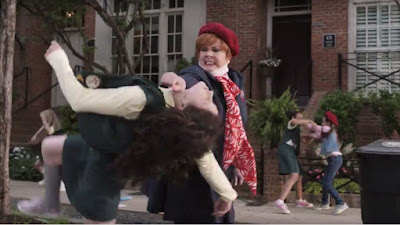 Official Synopsis:
Wealthy mogul Michelle Darnell (Melissa McCarthy) always gets her way, until she's busted for insider trading and sent to federal prison. After leaving jail, Darnell finds herself broke, homeless and hated. Luckily, she tracks down former assistant Claire (Kristen Bell), the only person who's willing to help. While staying with Claire and her young daughter, the ex-con devises a new business model for a Brownie empire. Unfortunately, some old enemies stand in the way of her return to the top.

North's Take:
Melissa McCarthy is one of the funniest people on the planet.
If they get her and Will Ferrell to star in a movie together, I may never stop laughing.
I think her and Kristen Bell could make a great duo here and be honest:
Don't you wanna find out why McCarthy is clothes-lining somebody is the above photo?
I always say: there is nothing better than seeing a great comedy in a packed theater.
Let's pray that The Boss will be more like The Heat, or Spy, and less like Tammy. 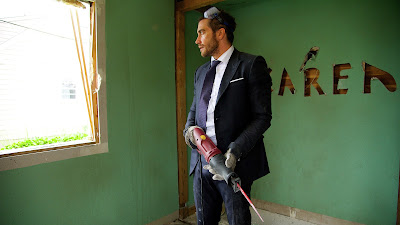 Official Synopsis:
A sympathetic woman (Naomi Watts) and her rebellious son (Judah Lewis) form a strong bond with an investment banker (Jake Gyllenhaal) whose life begins to unravel following the death of his wife (Heather Lind).

North's Take:
Well the synopsis is short and sweet, but I don't think they left anything out.
This is a showcase film for the acting talents of Jake Gyllenhaal, plain and simple.
And make no mistake, Gyllenhaal has the goods:
He is nothing short of phenomenal in End Of Watch, Prisoners, and Nightcrawler.
I know Gyllenhaal and (hopefully) Naomi Watts will do their part, but:
Can director Jean-Marc Vallée can replicate the emotional power of Dallas Buyers Club?
If so, don't forget to bring the tissues!

Thanks For Reading!
Please Follow Us On Twitter For Daily Movie News and Links: @NorthSouthFilm
Posted by Dan at 4:41 PM No comments: