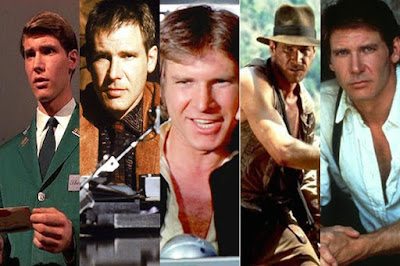 In a career that spans exactly 50 years, Harrison Ford has played dozens of characters from POTUS to a Russian submarine captain and a CIA agent to a young street racer. But as we all know, Ford is really known for three legendary characters­: Han Solo, Indiana Jones, and Rick Deckard.

Recent years have seen him reprise both Han and Indy, and with this week’s release of Blade Runner 2049, Deckard rounds out the trifecta of classic characters returning to the big screen.  With that in mind, we present…

Of course, I like Harrison Ford. He has played 3 of the most revered characters in all of film geekdom. But outside of those roles, I am fairly blasé about the infamously grumpy actor.

He hasn’t made a good movie (again, outside of those famous roles) since the ‘90s. I know I saw Clear and Present Danger, Patriot Games, Regarding Henry, Working Girl, Witness, etc. but I hardly even remember them.  They just didn’t really register for me. Also, while I enjoy Star Wars, I am not a HUGE fan, so don't be surprised to see something missing from my list.


So, I haven’t actually seen this movie yet, but I don’t care. As a huge fan of the original, plus Ford, Gosling, director Denis Villeneuve, cinematographer Roger Deakins, and so many other elements, I know I am going to love it. Can’t accept that? Then substitute in Apocalypse Now, which Ford had only a tiny role in, or even Air Force One, which was over-the-top fun.


A great early ‘90s film that still holds up impressively. Made back when Ford was still actually trying, he is fantastic as the wrongly convicted murderer, as is Tommy Lee Jones.


An absolutely fantastic film from director Francis Ford Coppola, perhaps unfairly overlooked because it was sandwiched in between The Godfather I and II. Overflowing with tension, dread, and guilt, The Conversation is an expertly crafted film led by Gene Hackman, the late-great John Cazale, and Ford, who plays a small, but important character who sets the whole plot in motion.


I love sci-fi. I love noir. I love rain. This movie was made for me. A film that I love more and more every time I watch it. I am fascinated with the film's history, including the multiple versions, Phillip K. Dick origins, and everlasting influence on future films. Plus, director Ridley Scott's commentary on the Final Cut is terrific and filled with great filmmaking insights.

1. Raiders of the Lost Ark (and all Indiana Jones films)
I'll admit, Professor Indiana Jones had a major influence on me going to graduate school and almost becoming a History professor (yes, I realize he teaches Archaeology, but its close enough). These films are all so much fun and timeless classics (even Crystal Skull, which is pretty bad overall, has its moments).

Harrison Ford can be my POTUS any day! He could have jumped in the escape pod, but instead he picks up a  gun and starts wasting every terrorist in sight. I thought this was Ford's best turn as an action hero: I'll take Alec Baldwin as Jack Ryan any day. AIR FORCE ONE shows what happens when you mess with a guy and his DVR'd (well at this point in time, VHS-taped) football game.

Sorry there is no spoiler alert for the above gif, but if you missed the Best Film of 2015 it's your own fault.  It took 32 years for Ford to reprise his role and it was it worth the wait. While his modern Han has aged, nobody plays a wily veteran quite like Ford. He gave us some laughs, tender moments and easily the biggest gasp I have ever heard in a movie theater (see above gif). Yes, the beloved Han Solo character dies, but Ford's performance will live on.

Ford's first major film role may not be one of his hallmark characters, but boy do I love Bob Falfa and AMERICAN GRAFFITI. It is a perfect film: the characters, the soundtrack, the cinematography, it all works in harmony to transport you to 1962 Smalltown, USA. The was the first collaboration between George Lucas and Ford, they would work together on the STAR WARS series and THE INDIANA JONES series. Were those any good? Lol. Also, I'm pretty sure if my wife left me, it would be for 1973 Harrison Ford. And honestly, I couldn't blame her. Ain't He Neat?

The coolest Archaeology professor to walk the Earth teams up with his even cooler Dad (Sean Connery) to beat the Nazis? Count me in! LAST CRUSADE is by far my favorite installment in Indiana Jones series and made TEMPLE OF DOOM look like a bad dream (which it was). Also, the VHS started with a movie-tie-in Diet Coke commercial, which was awesome before we became jaded with product placement and merchandizing, merchandizing!

Han Solo. Easily one of the most recognizable characters in film history, this smart-alec pilot of the Millenium Falcon smuggled his way into our hearts in 1977 and helped make STAR WARS the 2nd highest grossing film of all time (adjusted for inflation). While he actually has a bigger role in EMPIRE STRIKES BACK, I cannot stress enough that original Han is the best Han. At times he perfectly plays the part of the audience and stands in disbelief of what he is experiencing. Basically, the coolest every-man who ever lived. And he shot first.

Check Out Our Other Best Of Lists: