This time, it's The Top 5 Baseball Movies.

Now if you know Chris and/or me, you know this: baseball is in our blood.
I would say besides film, baseball is our next favorite thing.
While I will always have to overstate my baseball prowess, Chris doesn't need to exaggerate.
He was a legitimate force in High School: He won a Player Of The Year Award in Louisiana.
'Nuff said.
I am relegated to claiming I would have taken him deep, knowing fully that it's a lie.

Anyway, if you want to know about Baseball or Movies or Baseball Movies, we can go for days.
Many, great films revolve around the subject of baseball.
In fact, I own every movie and honorable mention on both lists.
Also, I can say I have seen all of these films over a dozen times
We could have easily done a Top 10 or Top 15, but we (almost) limited ourselves to a Top 5. 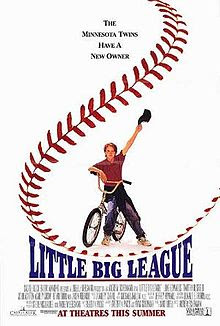 A kid inherits and manages a major league baseball team and the legend of Billy Heywood is born.
LITTLE BIG LEAGUE is an awesome baseball movie. It gets the sports action right and although the premise is absurd, it carried off well because of the up-to-date references and good cast of characters. Plus, the entire sequence featuring Randy Johnson and Ken Griffey Jr, who will both be first ballot Hall Of Famers, is great. Every team in the world tried that hidden ball trick after it. 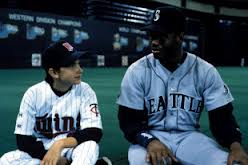 The film also foreshadowed real life: in the film, Randy Johnson comes out of the bullpen because it's a playoff game, then it actually happened the next year against my beloved Yankees!
Lots of fun lines and jokes, including Dennis Farina working his magic as a jerk manager.
I love Bowers, Blackout, Lou Collins and that loser Lowell. Absolutely breaks my heart when Billy has to cut Jerry from the squad. All that, plus the "Run Around Sue" Montage? I'm in!


Sad that this film is so underrated.
But guess what? There is another guy who knew LITTLE BIG LEAGUE is dope.
Yup, our hero, Roger Ebert, strikes again!
Here is his full review.
3.5/4 from Mr. Ebert is all the approval you'll ever need. 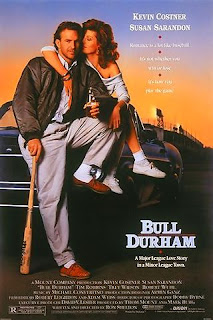 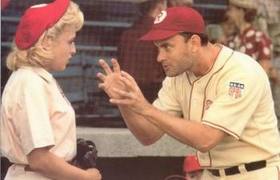 Two absolute classics.
Kevin Costner and Tom Hanks both turn in some of their best work.
And we get a ton of memorable performances, scenes and dialogue.

BULL DURHAM gets the nuances of the minor league perfect: the empty stadiums, the players coming and going, the bus trips, the promotions and crappy mascots. Bull Durham is SLAP SHOT for baseball. It's a smartly written film and has a ton of quotable lines. Plus, the love story works well and Susan Sarandon had a great swing!

I never get tired of A LEAGUE OF THEIR OWN.
I love everything about this movie: the tryouts at Wrigley Field, Shirley Baker, Jon Lovitz basically playing himself, the sibling stuff with Dottie and Kit, Marla Hooch getting drunk and singin' to Nelson, Madonna and of course Hanks as the drunk, ex-ballplayer, Jimmy Dugan, and the genius, "There is No Crying in Baseball".

It's incredible.
Everybody knows, "There is No Crying in Baseball".
Evelyn and her sin of over-throwing the cut-off man drive Dugan to hysterics and we get the pleasure of Hanks turning ten shades of red and spewing out stories of Rogers Hornsby and the unwritten rules of baseball. The sequence will go down in film history and I like to watch it every now and then just to laugh. It's pure baseball bliss and I love it.

I did a write-up on THE SANDLOT is this Dan's Discs.
Then we did a DVD giveaway of the film, which revealed a classic film reference.
The Dan's Discs Post also contains a Past Ebert, where Mr. Ebert gets at the core of the film with this thought:

"If you have ever been lucky enough to see 'A Christmas Story,' you will understand what I mean when I say 'The Sandlot' is a summertime version of the same vision. Both movies are about gawky young adolescents trapped in a world they never made and doing their best to fit in while beset with the most amazing vicissitudes."

I love THE SANDLOT.
It is a touchstone of my childhood, even though the film is really about my parents generation.
My dad lived THE SANDLOT, complete with the scary dog on the other side of the fence.
Baseball meant more to kids then than it does now, or ever will again.
We are lucky to have this film, Benny The Jet, Wendy Peffercorn and "You're killin' me Smalls".
For-e-ver. 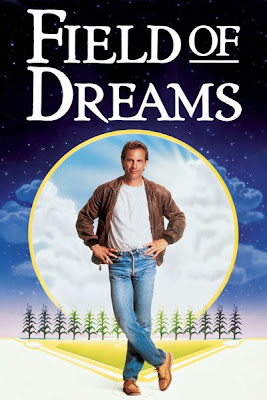 I cry every single time I watch FIELD OF DREAMS.

It doesn't matter that I've seen it thirty times and I know what coming.
By the time Costner drops, "Hey Dad, you wanna have a catch?" I'm inconsolable.
The film is powerful, funny, moving and damn, is it original.
Try to explain the plot of it aloud.
Is it fantasy?
Science fiction?
Whatever it is, it's amazing.

It's more than a movie about baseball.
It's about fathers and sons and America and history.
Baseball is just a thread that ties us and all of those things together.
If you don't like FIELD OF DREAMS, I basically think you have no soul.

Guess who else loved FIELD OF DREAMS?
Ebert, of course.
Here is his 4 Star Review.

Oh and in case you need a good cry today: 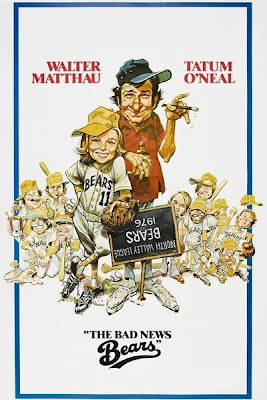 Without a doubt the truest baseball movie ever made.
If you played Little League, you know what I mean.
The characters, dialogue and situations are all real.
Our league had a Coach Buttermaker, he would drink and chain-smoke during the games.
In the dugout.
And he was a cop!

We had a Kelly Leak, a bunch of Lupuses and Steins.
We had Tanners, Ogilvies, Engelbergs and Coach Turner.
Every single thing that happens in THE BAD NEWS BEARS has happened at children's baseball games.

The film is straight up hilarious and Walter Matthau is truly incredible.
He is like a drunken Willy Wonka, and you're not sure if you love him or hate him.
The key is that you know him and everybody else.
I have to watch this at least once a year and pretend that I was the Kelly Leak.

MAJOR LEAGUE- Willie Mays Hayes, Rick Vaughn and Lou Brown. Plus, Randy Newman.
THE FAN- #4 on my Tony Scott List. Insane film. DeNiro as a psycho and Scott being Scott.
ROOKIE OF THE YEAR- A ubiquitous movie for my generation and Daniel Stern is great in it.
THE NATURAL- Wonderboy and "Pick me out a winner Bobby." 4 Oscar nominations.
PRIDE OF THE YANKEES- "Lou, Lou, Gehrig, Gehrig, Gehrig!" Classic about a great Yankee.

First off, thanks to Dan for the shout-out - and he is right: I love baseball, plus I am a sucker for sports movies in general (especially baseball).

Second, my favorite team is the Baltimore Orioles, so of course, my favorite player of all-time is Cal Ripken, Jr. and I absolutely despise the Yankees (Just thought you would like to know).

And finally and most importantly, I hate Field of Dreams. Blasphemy, I know. I just do not like it.
Same goes for Rudy.

Now that I have gotten that out of the way, here is my list:

With these lists, I am probably going to be doing a lot of ties (so deal with it). Both these movies came out in 1993, when a young, baseball obsessed boy named Chris was working his way through the ranks of Little League (we actually called it Dixie Youth Baseball in the south - Dan should love that). So these two movies about kids my age playing baseball, how could I not love them? Released the next year, Little Big League probably could have squeezed in here to, but I honestly do not remember much about that movie (probably because it was about the usually awful Twins). 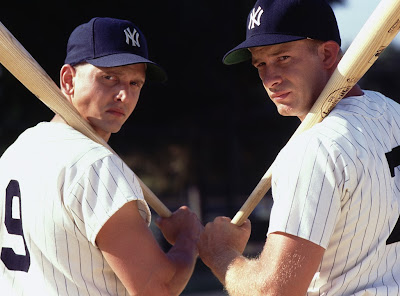 Knowing how huge and annoying a Yankees fan Dan is, I am shocked that he did not include this one on his list. This HBO movie is directed by Bill Crystal, a lifelong Yanks fan himself, who grew up watching the real life Roger Maris-Mickey Mantle homerun race in 1961 - so you know the film would be passionate and detailed. Barry Pepper and Thomas Jane are terrific as Maris and Mantle. 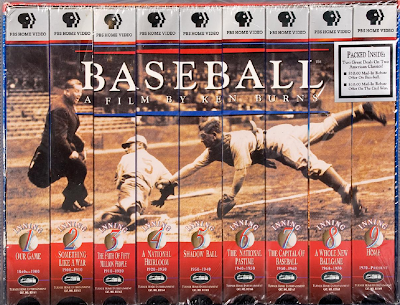 Ken Burns is probably the best and most consistent historical documentary filmmaker working today. He has made a film on just about everything uniquely American (The Civil War, Prohibition, WWII, Jazz, etc). His war docs are probably the best, but his 11-part series Baseball (9 parts originally, then 2 "extra innings" added later) is almost just as great. The films cover America's pastime from its origins up through the '90s and the players' strike.


Certainly the funniest sports movie ever made, Major League is also a great baseball in general. Filled with so many great bits, memorable characters, and quotable lines, the movie is a true classic. I love this movie and own it on DVD, yet I still watch it everytime it comes on TV (which is quite a lot). In all honesty, I wanted to be Rick "Wild Thing" Vaughn. 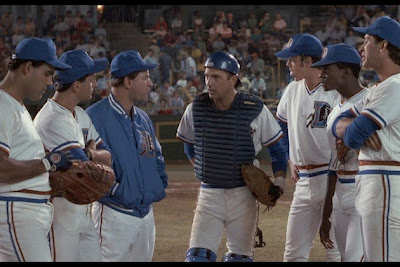 Since I made myself clear on Field of Dreams earlier, here is a Kevin Costner-baseball movie I can get behind. Back in my day, I knew a lot of players like Nuke LaLoosh that needed to be knocked down a peg or two. In my opinion, a film about the minor leagues is infinitely more interesting than one about the majors. Plus, Costner's "I Believe In..." speech is pretty great, though unlike him, I do full support the designated hitter (and it should certainly be in both leagues).

A League of their Own (1992) - Great movie and was on my original list, but it I chopped it. Classic Hanks, plus the main character's last name is Henson, so I regularly tell people she is based on my grandmother. She is not.

The Natural (1984) - I remember not liking this movie much as a kid (because it is not a kid's movie), but seeing it later in life, I definitely appreciated it a lot more.

Summer Catch (2001) - This movie is admittedly awful, but I just can't help but like it. Guilty pleasure baseball movie all the way. I also embarrassed to admit I don't completely hate Fever Pitch (2005) either.
Posted by Dan at 2:54 PM