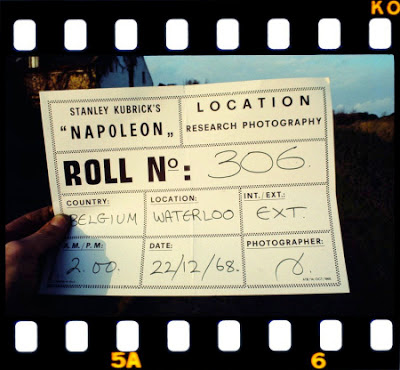 A while ago Chris listed his Top 5 Favorite Stanley Kubrick Movies.
1. Dr. Strangelove
2. Paths of Glory
3. A Clockwork Orange
4. The Shining
5. Lolita

Obviously, my list was far superior, but it was also easy for me to make.
DR. STRANGELOVE is probably in my Top 5 Films. Period.
Huge poster of it in my college rooms? Check.
Using obscure references to it in film class? Weekly.
Peter Sellers, George C. Scott, Sterling Hayden? Game, Set, Match.
I mean just watch this:

The same goes for A CLOCKWORK ORANGE . . .

But when Chris saw #5 on the list, he said, "you cant list an unmade movie".
Fair enough, I didn't really need to argue with somebody who left 2001 off a Kubrick List.
And the last time Napoleon was in a movie, it was this:

The reason I had to include NAPOLEON was the multitude and nature of the stories and wives tales:
"Kubrick has tens of thousands of location photos, ten thousand more historical documents"
"He wanted Audrey Hepburn, Alec Guinness AND Lawrence Olivier"
"Kubrick read everything ever written on Napoleon"
"He's been working on it for 15 years"
" The Screenplay is AMAZING! "
And by most accounts, these statements are more fact than hyperbole. If it got made, it would have to be a Top 5 Kubrick Flick. Right? Well last night brought some big news about #5:

STEVEN SPIELBERG IS MAKING IT INTO A MINISERIES!

If Spielberg does this thing justice, you can back the Golden Globes and Emmy Trucks up to the house. I think it will work perfectly as a miniseries because I don't see a way the Kubrick version could have been under 4 hours. It's too bad we never got to see Kubrick's last masterpiece, but maybe this is Spielberg's next masterpiece.